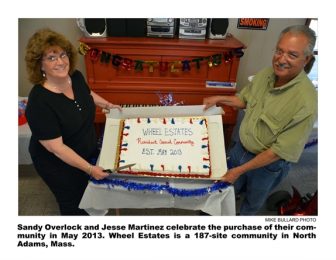 Someone asked me once, “What do you do when you travel for work?”

Over the coming weeks, I’m going to drop you a line from the road so you can see what I’m doing. 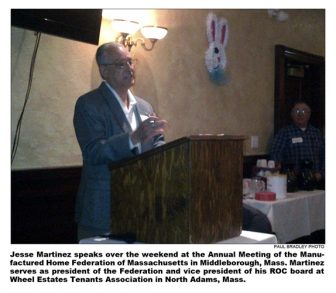 One of the things I love about my job is the diversity of people and settings.  On Saturday this week, I drove to Middleborough, Mass., to speak at the Annual Meeting of the Manufactured Home Federation of Massachusetts.  The president and secretary of the state’s homeowners’ association are Jesse Martinez and Sandra Overlock.  These two extraordinary advocates for homeowners’ rights are also the vice president and president, respectively, of the Wheel Estates resident-owned community in North Adams, Mass.

Several states – not most unfortunately – have a state homeowners’ association that is looking out for and promoting protections for homeowners in MHPs.  This group has a strong history of advancing consumer protections in Massachusetts, including an opportunity to purchase law that gives homeowners the opportunity to match offers from outside investors looking to buy their MHPs from the commercial owner.  This notice law has been instrumental to ROCs forming in Massachusetts.

I spoke about resident ownership and was happy to have ROC leaders from Pine Tree, Cranberry Village and Hillcrest – plus Wheel Estates, of course – in the room!  So, I introduced them and let them do some of the work.

I was approached after the meeting by two members from a MHP in Chicopee, Mass.  Their community was bought six months ago by an investor who has raised the rents rather dramatically.  They’re kicking themselves now.  But, when they got the notice, they told me they had never heard of the Federation or of ROC USA or the Cooperative Development Institute (our TA provider in Massachusetts), so they let the notice go by without action.  Now they’re regretting it.

I came away very pleased to see ROC leaders contributing to the Federation and advancing consumer protections for homeowners in commercially owned MHPs, happy to spread the word and get to know more people in Massachusetts, and satisfied that at least those folks won’t let a purchase opportunity get by them without seriously considering the opportunity presented to them.  In reality, it’s an opportunity that only comes around once every 10 to 25 years for most.

Next up:  A business meeting in Chicago on 4/28 on my way to the national manufactured housing trade show in Las Vegas on 4/29.  Until then, ROC on!  Paul