For most of you, Mac is not someone you know.  Lois Parris of the Lakes Region Co-op in Belmont, N.H., however knows Mac very well.  In fact, it was at her kitchen table in 2001 where Mac saw and heard directly the skills and dedication of ROC leaders.  From her table, we drove to Windy Hill Housing Co-op in Tilton, N.H., where he met many members of the Board, including Ken and Pam Dame, who hosted us.

Frankly, he was sold on resident ownership then and there.  The fact is, ROC leaders inspire people, and some of those people turn out to be very influential.  Mac was and is. 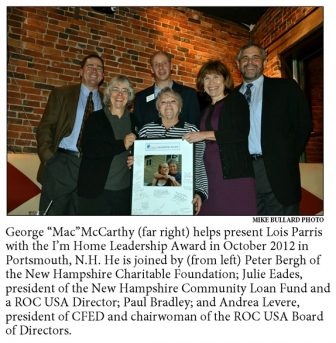 Not long before his infamous journey to New Hampshire’s ROCs in 2001, Mac had joined the Ford Foundation as a program officer.  He had the requisite academic background, including a Ph.D. in economics, had been both a professor and a researcher at the university level, and more.

His new job (which he just left at the end of last month after 14 years) was to make grants and loans in the area of rural affordable housing within Ford’s mission of supporting democratic values and reducing poverty and injustice.

From his research at the University of North Carolina, he knew that mobile and manufactured homes were an important part of the mix of housing for low- and moderate-income families.  He also knew that nonprofit advocates didn’t just ignore manufactured and mobile housing, they opposed it!

Here’s how he put it recently in an article in Stanford Social Innovation Review:  “Even among affordable housing advocates, ‘there was outright hostility,’ McCarthy recalls. ‘People saw manufactured housing as part of the problem.’”

To be sure, Mac wants manufactured housing (and mobile homes) to be a secure and affordable homeownership asset for working and retiree households.

He and I have worked very closely together over the last 14 years.  We co-authored an article in 2012 that I will now cherish.  It might be our last, hard to know.  We both understand and see the promise of your homes as an important affordable housing resource in your community and nationwide.  Sure, we need to straighten out the laws to protect homeowners, expand resident ownership, and improve access to energy efficient new homes and decent home financing.  Most of the cylinders are firing in New Hampshire, but it’s not yet widespread.

On both a personal and professional level, words alone feel inadequate to communicate my respect for Mac.  He’s smart – anyone who talks with him knows that – but he’s also incredibly attentive to people’s ideas, generous with his time, fair in his dealings and completely open and up front.  He’s a true professional and a very good friend.  I wish everyone could meet and know Mac, and perhaps someday you will!  He’s not going away.

As I said, he left the Ford Foundation and is now serving as President of the Lincoln Land Institute in Boston.  He’s closer to our New Hampshire offices and I was able to have dinner with him on his first day at his new job.  He’s doing really well, smiling a lot.  I’m happy for him.

Even if you don’t know him, he’s been your cheerleader and champion.  He loves that each of you is providing positive leadership in your community – the same sort of leadership he provides.  Sure, they’re different circles but it’s all the same, too.  That’s how we’ll make the world a better place, one neighborhood at a time, in big and small audiences, in Boston and in Kalispell, Mont.  That’s how change actually works.  It’s the work of many.

Please join me in thanking Mac for his generous support and outstanding contributions to the ROC world!  Thank you.