The stories about the first Resident Owned Community – Meredith Center Co-op in Meredith, N.H., – often will include a line or two about how the start-up nonprofit New Hampshire Community Loan Fund financed the homeowners’ purchase of the 13-home community.

The larger story behind the story of the Sisters of Mercy’s $38,000 loan to the Community Loan Fund is contained in a story in the current issue of Shelterforce.  It’s worth a read.

Their pioneering community investments are covered in the article but their impact in New Hampshire is not.

The Sisters’ loan was the first ever made to the Community Loan Fund, a start-up nonprofit founded by Juliana Eades in 1984.  The idea was simple really:  Borrow money from individuals, churches, banks and foundations and turn around and lend it to nonprofit community efforts that would lead to good jobs, stable housing, natural foods and nonprofit childcare.  Go where no bank would go alone and in a way that worked for low- and moderate-income people.

Simple in theory, hard in practice.  Who would lend to a start-up nonprofit with an idea?

The first community loan fund – the Institute for Community Economics – was only four or five years old when Juliana started.  The only other similar effort was under way in Boston in what today is Boston Community Capital.

As early lenders in all three, the Sisters of Mercy were early investors in what has become a community development finance sector that now numbers more than 1,000 now U.S. Treasury certified Community Development Financial Institutions, or CDFIs.  ROC USA Capital is a national CDFI.  The New Hampshire Community Loan Fund has a statewide service area.  Individual lenders are still a mainstay of the capital that is deployed in New Hampshire communities.  Please look at making a loan to the Community Loan Fund.  You’ll be following the Sisters’ great example.

While the article’s photo is a nod to resident ownership, it didn’t include much beyond inference as to their impact on a national movement!

Between 1984 and 2008, 88 co-ops would follow Meredith’s example.  In 2008, with great support from the Community Loan Fund, we spun off ROC USA as a national social venture to do what we had been doing in New Hampshire: making resident ownership viable and successful through training, financing and good systems.

Since 2008, the number of trainers – what we call Certified Technical Assistance Providers – in the national Network has expanded to nine nonprofits, including the Community Loan Fund.  That Network of nonprofits today supports a total of 214 Resident Owned Communities and more than 13,600 homeowner-members in 15 states!

The financing ROC USA Capital leverages is from larger institutions like foundations, banks and insurance companies because the sums have grown quite large.  (ROC USA Capital last year financed over $30 million in total financing.)

That said, those lenders are all following in the footsteps first set by the Sisters of Mercy.

On a personal note, attending the mortgage burning party in the summer of 2002 at Meredith Center Co-op is a fond memory.  I can still remember the smiles and palpable sense of accomplishment and pride.  Mission accomplished. 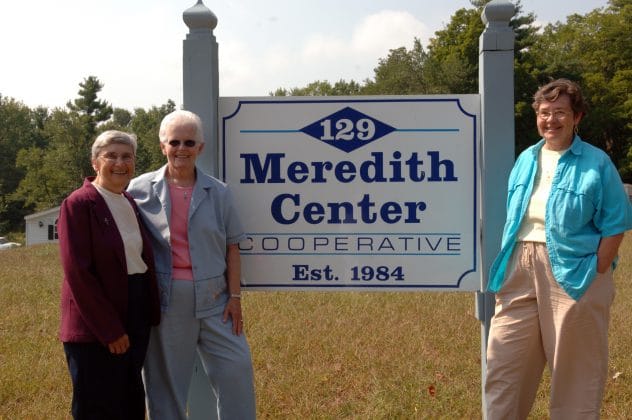