We released our annual market rent study last week, and the impact is real and meaningful.

The objective is pretty simple:  How do co-op site-fees compare to other communities in each market?

To answer that question, we hire an appraiser to do a market rent study for every co-op that ROC USA® Capital has financed on every 5th anniversary of the co-op’s purchase.  We then compare that market rent to the co-ops’.

We select Capital’s loans even though Capital does not finance every co-op because we have internal data that is material to the fuller picture of co-op health.  Specifically, we need an exact accounting of their site-fee increases and an accurate accounting of their community improvements, reserves and loan covenant performance.

Co-op leaders understand that fee performance is only part of the picture.  Here’s how Dennis Jakubowski, Board President at Marilla Country Village in Alden, N.Y., put it, “We’ve raised our site fees just $10 since we purchased the community in 2011, and in that time, the co-op has invested more than $250,000 in improvements,

including new roads that look great. Owning our community is the best thing we have ever done.”

In total, the 23 co-ops operating on below market site fees are saving their Members more than $775,000 a year!

But wait, there’s more.  Remember, 25 is just 10% of the total number of co-op communities in ROC USA Network.

Even if we eliminate all co-ops that are 5 years and younger that leaves 150, and 9,000 homeowner-Members who have owned their communities between 6 and 35 years.  Being very conservative, let’s say those co-ops are just 25% below market on average.

In that group is Fisherville 107 Co-op in Concord, N.H.  They celebrated their 25th anniversary two weeks ago.  Their site fees are less than 50% of the market, my guess, about $250 below market.

Multiplying 9,000 homeowner-Members times $1,600 a year savings equals – get this – more than $14 million in annual savings!  Seriously, that’s the benefit of removing these communities from the speculative real estate market and putting homeowners in control.

And, look at the long-term impact; look at what happens when you take the average annual increases in co-ops and compare it to annual market increases.

This is real, and it’s exactly what low- and moderate-income people need to experience in this economy and through their attainment of the American Dream.  Homeownership needs to be a source of long-term wealth-building and basic economic security.  Co-op owners are delivering it – for themselves and for future homeowners who will not know the names or the faces but they’ll know the benefit.  And, broader communities will know the benefit of a secure and affordable stock of housing that supports local people, and not some distant corporation.

Let me make this very real.  The Clackamas River Community Co-op has owned its community since 2012.  Since an initial increase to purchase the property, Members have actually lowered their site fees over the last seven years.  Meanwhile, a Real Estate Investment Trust (REIT) that owns a community next door has increased their rents by a total of $190 per month in the same period.

It’s not rocket science.  It’s just evidence of what we all know:  #ownershipmatters 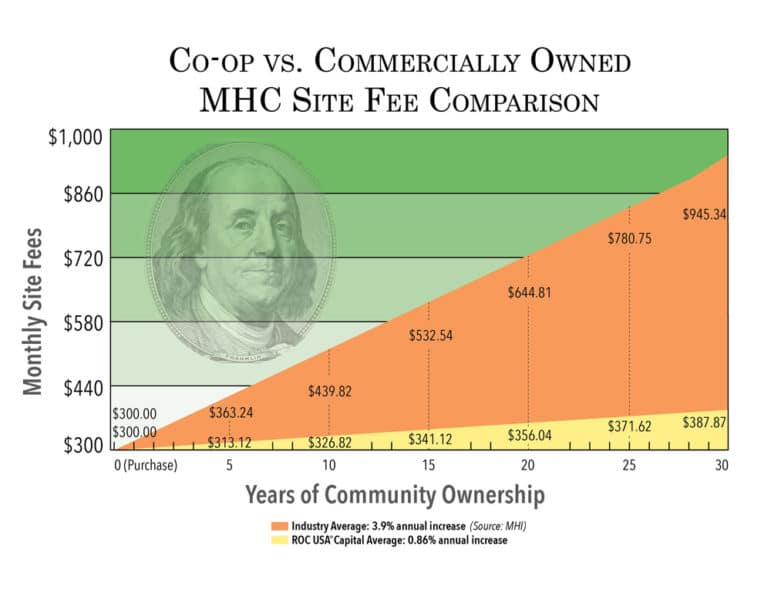