A lot has been accomplished in our first five years of national operations. Together with our Network of TA Providers – which now number eight – we have brought opportunity, expert assistance and capital to homeowner groups in probably about 60 parks and successfully supported 46 of them purchase their communities. Local ownership is job one and it remains a key focus. Despite many people who said a national program was too ambitious, through hard work by community leaders and members and the nonprofits we’ve brought together to support this mission, we’ve proven those who doubted you and us wrong! 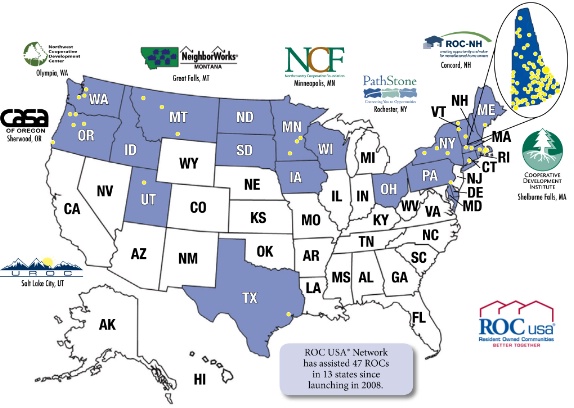 Resident ownership does work in a variety of markets, homeowners do want control of their communities and homeowners are capable community owners! And, we can develop the expertise, financing and systems to support successful ROCs. (I had no doubt except for the financing part – it’s still hard to convince institutions that control capital that resident ownership is a safe bet. We just have to keep proving ourselves and eventually the capital markets will listen.)

Moreover, together we accomplished all that we have through the worst recession since the Great Depression. Just imagine what’s possible in a good economy! Part of what community leaders and we have been imagining through the start-up phase will be announced at the end of May. Between ROC Association, myROCUSA.org, ROC Marketing Program, Management Guides and our continued engagement in the Community Leadership Institute, we have a lot to execute on in 2013. We’ve come through the worst of it and we’re really building and growing now to fully support our mission of making resident ownership viable and expanding economic opportunity for homeowners. The programs to support the latter will be more evident in our second five years.

Thank you for all that you do in and for your community and in support of resident ownership.