CONCORD, N.H. – When John Oliver taped an episode of “Last Week Tonight” about the wave of aggressive new money flooding the manufactured home community sector, we heard from a lot of people.

It was a wild week! 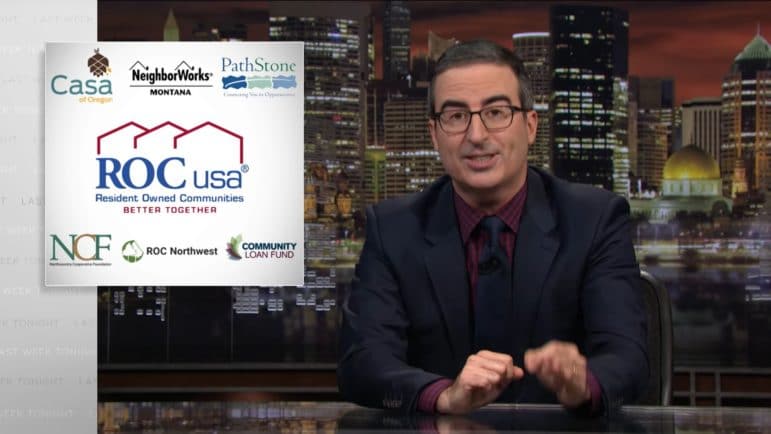 One of my favorite comments came from a ROC Member in Vermont who wrote, “I watched the John Oliver video re: ‘Trailer parks’ last night.  It made me so happy that we took that route, that ROC [USA] supported us and we now own our land!!”

The story definitely struck a nerve with millions of viewers. Literally millions. The show aired on HBO a week and half ago.  The video posted the next day on YouTube has already generated 5.5 million views!

John Oliver focused on the onslaught of aggressive new money in the sector.  The examples of rent hikes cited were alarming and atypical but also real. Oliver was making a point about the fate of residents in communities that experience significant rent increases and, as any good debater would, chose stories that best illustrated that point.

Oliver is a satirist. Viewers tune in for information to be sure, but also for a dose of insolence toward big business, especially as it impacts the scary and growing wealth gap in America. That’s an issue near and dear to the thousands of low- and moderate-income homeowners in the ROCs we work with.

He pointed to resident ownership as a way to mitigate risks by removing MHCs from the speculative real estate market, and we agree that it is.

It’s every nonprofit’s dream to have more than 5 million views of its logo and to be pointed to as a “solution”.  Oliver said, “And, while that sounds like a long shot, there are nonprofits that have had real success” in making resident ownership viable!  That’s us!

A few people expressed feeling that it felt in part like an attack on homeowners. That’s something we would never condone.

Mostly, the piece is embarrassing to some operators who subscribe to a certain school of thought when it comes to homeowners and MHC ownership. We know though that there are many community owners who are concerned about the homeowner experience, and they have that concern for both business and basic humanity reasons. The piece shines a light on some operators and that taints the entire sector.

As his show has gained popularity, Oliver has become something of an influencer on issues. If the outcome of this episode is that when it’s time to sell, more community owners decide to give the homeowners in their communities the chance to become landowners, then perfect!