This was a good invitation. Generally, Michael Sloss, ROC USA Capital’s Managing Director, and I are directly reaching out to foundations one by one. This was an opportunity to speak with a group and get to know some people over two days.

I was also introduced by a senior program officer from the Ford Foundation, Christine Looney. Ford is Capital’s largest lender with two loans totaling $10 million. And, Ford is highly respected in the foundation space. Ford has been making grants and loans in the manufactured home space since 2001 when George McCarthy joined Ford as a Program Officer. I’ll write a blog about “Mac” and his historic role in manufactured housing and specifically in resident ownership in a separate blog.

The Mission Investors’ Exchange (MIE) is a foundation staff and Board conference that attracts about 300 people. Our CDFI was only one of four present as far as I could tell. That makes for a good audience! 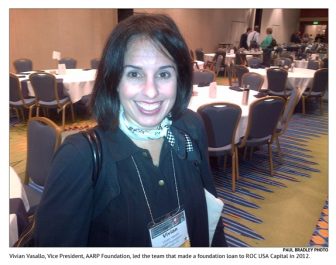 As these things go, I didn’t raise a dime in the two days but I did meet several new people and re-connected with several well-placed foundation folks. Building relationships and showing
staying power (resiliency) is important in this work. Something will come out of it; maybe that something won’t obviously be connected to MIE.

Football player Jack Youngblood put it this way: “Good luck is the residue of preparation.” Preparation and putting yourself in a position to be lucky. It was a good trip and good opportunity. Time will tell how much good comes from it!

Next up, a meeting with Mac next Thursday and Friday.

I will close, speaking of Ford, with a quote that our friends at West Wood Village, a ROC in Plymouth, Mass. have displayed in their community center. It really applies to every ROC and to us as a network.

Like your ROC, these are loans which ROC USA Capital has to pay back. ROC USA Capital has loans from several foundations and banks, including the Ford, Rockefeller, AARP and Calvert foundations and Bank of America and Wells Fargo. Without their financing, ROC USA Capital could not make loans available to communities.
I met up with Vivian Vasallo from AARP Foundation, who is not only a lender for us, but also promoted the video interviews featuring the ROC Association Directors. They were great — if you haven’t seen them, check them out!