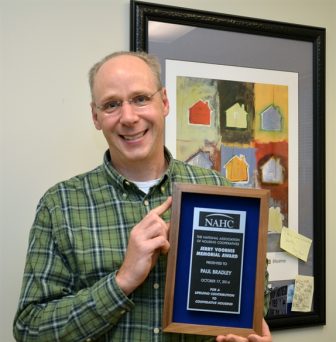 The Voorhis is a lifetime achievement award that recognizes significant leadership in both theory and practice. It is presented annually by the NAHC, a national federation of housing cooperatives, mutual housing associations, other resident-owned or controlled housing, professionals, organizations, and individuals interested in promoting the interests of cooperative housing communities. Incorporated in 1960, NAHC is the only national cooperative housing organization.

“What an honor,” Bradley said last week from his Concord, N.H., office. “Jerry Voorhis was a real force in the cooperative housing world and even being mentioned in the same context with him is a thrill.”

Jerry Voorhis was a five-term U.S. Congressman from California who went on to lead the National Cooperative Business Association, known then as the Cooperative League of the United States of America. A man of impeccable integrity, Voorhis believed in and did his best to teach, apply and widen the use of basic cooperative principles.

NAHC considers a host of factors when choosing the award winner each year, including:

The candidate’s long-term commitment to and consistent application of the basic Rochdale principles and practices as applied to housing cooperatives;

Significant candidate activity on a leadership level in both the theory and practice of cooperative housing, either or both on the national organization level and in their home community; and

The candidate’s actual experience living and working in a housing cooperative.

“I am honored to accept this award on behalf of the remarkable communities and community leaders as well as talented teams that I have been lucky to work with over the years,” he said.  He also said he won’t let the lifetime achievement recognition serve as an excuse to slow down.

“The Community Loan Fund’s 30 years of work in New Hampshire is proof resident-owned manufactured home communities not only work, they thrive,” Bradley said. “At ROC USA, we’re six years into our mission to bring that kind of opportunity for self-determination, self-reliance and security to homeowners across the country and we’re seeing the same kind of success everywhere we go.”

Paul holds a B.A. in Economics from the University of New Hampshire. In 2007, he graduated from Achieving Excellence in Community Development, a joint 18-month Executive Education program with NeighborWorks America and Harvard University. In 2011, Paul was named an Ashoka Fellow and in 2013 was awarded Social Innovator of the Year by the Carsey Institute at UNH. ROC USA, LLC, is a nonprofit social venture that employs an integrated financing and technical assistance model to enable homeowner groups to buy, own and improve their MHCs as long-term stewards of their neighborhoods. In six years, ROC USA and its network of eight certified technical assistance providers have helped 68 homeowner groups purchase their communities, permanently preserving more than 4,300 homes as affordable housing. For more information, visit www.rocusa.org.