WASHINGTON, D.C. – Whether it be stabilizing rent for decades or developing creative ways to improve residents’ quality of life, the resident-owned cooperative model is an overwhelming success.

The critical source of secure affordable housing is creating empowering opportunities for Members, from running for a position on their Board of Directors or fundraising to build a new playground for the neighborhood children.

“When you invite a resident voice, that iteration of innovation happens very quickly,” said Marietta Rodriguez, acting senior vice president of NeighborWorks® America and a ROC USA® Board member.

Pride in those neighborhoods and the ability to tap into undiscovered leadership potential also develops as a result.

“You create an opportunity for people to invest in their own homes and their own community,” said Kim Capen, president of the Medvil Co-op in Goffstown, N.H. 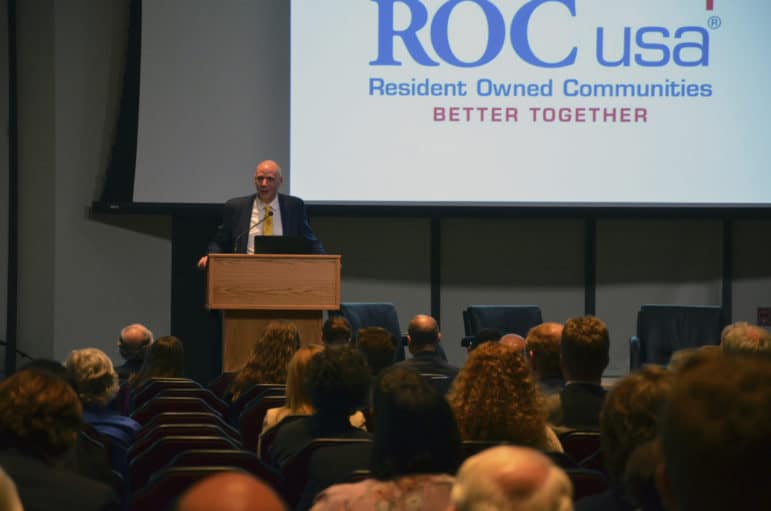 These were just some of the points brought up during a panel discussion at the annual meeting for the National Cooperative Bank, a longtime partner of ROC USA®.  NCB has provided financing for community purchases across the country, helping thousands of residents preserve their neighborhoods.

Andrea Levere, president of Prosperity Now and ROC USA Board Chair, moderated a panel with Rodriguez, Capen and George “Mac” McCarthy, president and CEO of Lincoln Institute of Land Policy.

The group discussed the origin of ROC USA, which launched 10 years ago, the working relationships with their partners, and how the business model works to scale and the positive impact on the 220 manufactured home communities that have gone co-op already.

McCarthy said a defining moment for him was sitting at Lois Parris’ kitchen table, hearing the firsthand account of how her life had changed since she and her neighbors in Lakes Region Cooperative Mobile Home Community in Belmont, N.H. purchased the neighborhood.

It was there, he said, hearing that firsthand account that the then program officer at Ford Foundation was quickly convinced to support the work that aims to provide thousands of homeowners with affordable housing in permanently secure communities.

For ROC USA founding President Paul Bradley, the discussion made clear the positive impact that’s been made on 220 communities and more than 14,000 homeowners in the Network since 1984.

‪“Now you see why we’re so excited about the scale of resident ownership,” he said.

The next decade will mirror the success of the last as the Network continues to stand shoulder to shoulder with residents.

“We are all pulling in the same direction,” Bradley said.

NCB debuted the video it commissioned in honor of ROC USA’s 10th birthday. Check it out below.