About half the community gathered in the Clubhouse for the party, with sleek black tablecloths and silver balloons decorating the tables in the room. A specially designed cake with the community’s logo sat at the front.

Residents from a neighboring ROC community came to the party as well, bringing a cookie cake with a message of support.

“Congratulations from your neighbors at Halifax Estates,” the cake read.

Hanging centered on the wall near the front of the room was the “We Own It!” banner, a testament to the dedication and hardwork put in by the residents that resulted in the purchase of the property.

Jean Cavanaugh, a board member, said she was thrilled to have the banner there and that Conifer Green residents are proud of their neighborhood.

As residents ready for the future, they expressed gratitude for those who have worked in the community in the past.

Marion Strout, the former park manager, was honored as well. Residents gave her a park ranger hat — which dubbed her as the Conifer Green Resident Manager — and a pair of binoculars. Stout was also gifted a screen print quilt showcasing the stone marker at the front entrance of the community.

The volunteers from the community — like the Board of Directors and the Activities Committee — were congratulated for the work they’ve done.

State Sen. Viriato “Vinny” deMacedo as well as State Rep. Thomas Calter stopped by to congratulate residents on the purchase.

Homeowners bought their neighborhood Feb. 27 for $2.91 million. Cooperative Development Institute will be providing technical assistance to the community for at least the next decade.

The community is the 19th in Massachusetts and the second in Kingston. 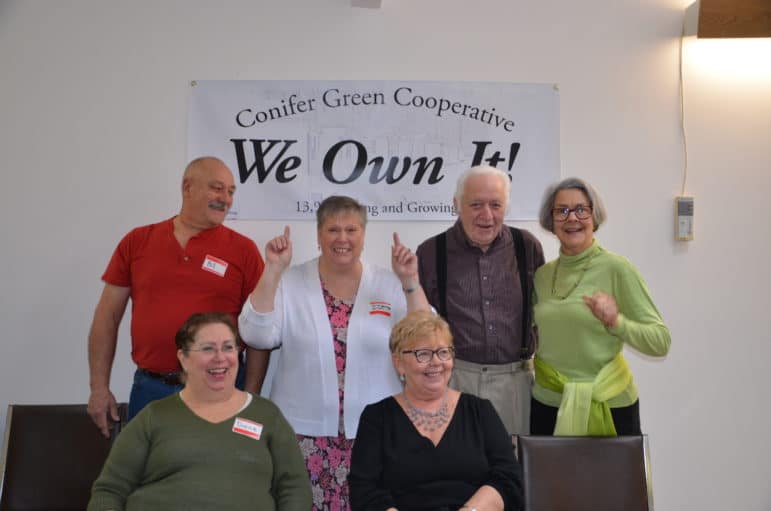