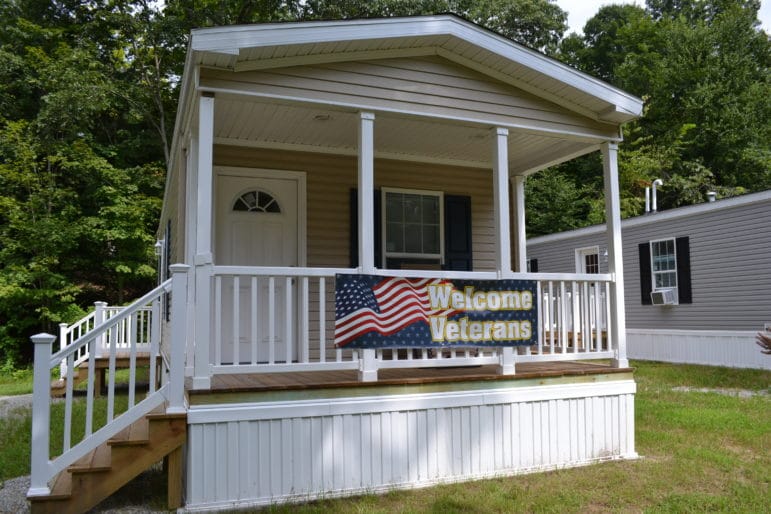 A veteran of the U.S. Marines, she had been competing for VA Home Loans to buy a house. But when she heard about the Veterans First Program at Rock Rimmon Cooperative in Danville, N.H., everything seemed to just fall into place. 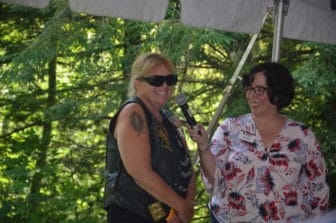 Gervais was looking to downsize, so the 500-square-foot, single-floor home was exactly what she needed. The home had a garden, which she said is her therapy, with a wagon wheel in it, which is the symbol of her American Legion Post.

“When I saw the wagon wheel in the garden, I said ‘That’s mine,’” Gervais told a crowd of about 50 residents, New Hampshire Community Loan Fund staff, housing officals, lenders, manufactured housing industry professionals, and local, state and federal dignitaries.

Most telling of all was the address: 13 Nicholas Circle.

“That’s my lucky number,” she said.

Gervais is one of the first homeowners to move into Rock Rimmon through the Veterans First program. Ten homes will be ready by the end of the year for veterans coming out of transitional housing. Half of the homes are already available, with homeowners moving into three so far.

The New Hampshire Community Loan Fund worked with the community to design the houses and install them in the ROC earlier this year.

Peter “Searching Owl” Giove moved in about a month ago. After a devastating fire, he spent a year and a half living at Harbor Homes in Nashua, a transitional living facility for veterans. He said he’s grateful for the chance to secure long-term, affordable housing. 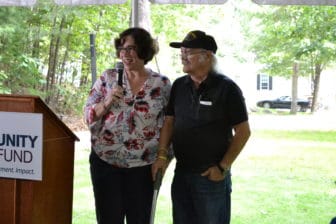 “They afforded me the opportunity to live in balance,” he said. “I’m benefiting from it and I wish to see other people benefit from it.”

These manufactured homes will cost the veterans who own them them significantly less than renting an apartment. Homeowners only need to put down $250 to purchase the home and the mortgage (including taxes and insurance) is estimated to be less than $200 a month.

The other additional expenses – the monthly lot rent and energy costs – are expected to remain low as well. ROCs’ lot rents are proven to be far more stable than those in commercially owned communities. A recent independent study found that rents in co-ops are raised 0.86 percent a year on average, while the industry average is 3.9 percent per year. The Energy Star-rated homes run efficiently to cut down on utility costs.

Six of the 10 homes are expected to be filled in the coming months. 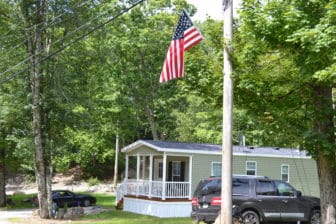 The quick success of the project is a testament to the strong work Rock Rimmon leaders have been doing over the years. The community became resident-owned in Jan. 2016.

“They were one of the most motivated groups we’ve ever worked with,” said Juliana Eades, President of the New Hampshire Community Loan Fund. “They were right on it.”

With roughly 300 vacant sites in the state, Eades said this is an innovative solution for filling vacant sites.

“This is demonstrating one way to turn those into opportunities,” she said.

With a lack of affordable housing in the state, particularly for veterans, the project is meant to start filling that gap.

“We started matching up problems with solutions,” Hopkins said. 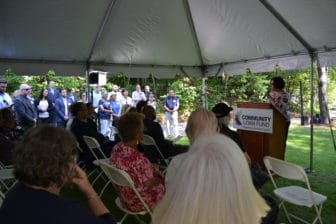 U.S. Rep. Chris Pappas said he looked forward to spreading the news about the project to his fellow representatives in Washington, D.C. Serving on the Committee on Veterans’ Affairs, Pappas said helping veterans is a cause that’s important to him and is grateful that Rock Rimmon residents are able to provide them this opportunity.

“This is the least we can do for our veterans to assure they have access to affordable housing,” he said. “This is an incredible place to live.”

Funders and partners for the Veterans First project include the Federal Home Loan Bank of Boston; Merrimack County Savings Bank; and the Jameson Trust, Thomas W. Haas Fund, Steven Epstein Donor Advised Fund, and Howe Family Funds of the New Hampshire Charitable Foundation. Skyline Homes innovated the design of these small homes with the encouragement of Next Step, a national partner focused on affordability and energy-efficiency in manufactured housing.

The project made headlines in local papers, including the New Hampshire Union Leader and The Eagle Tribune.