WARREN, Mass. — After learning about what it means to be a resident-owned-community, there wasn’t a single homeowner from the Heritage Village Association at the informational meeting against the idea. 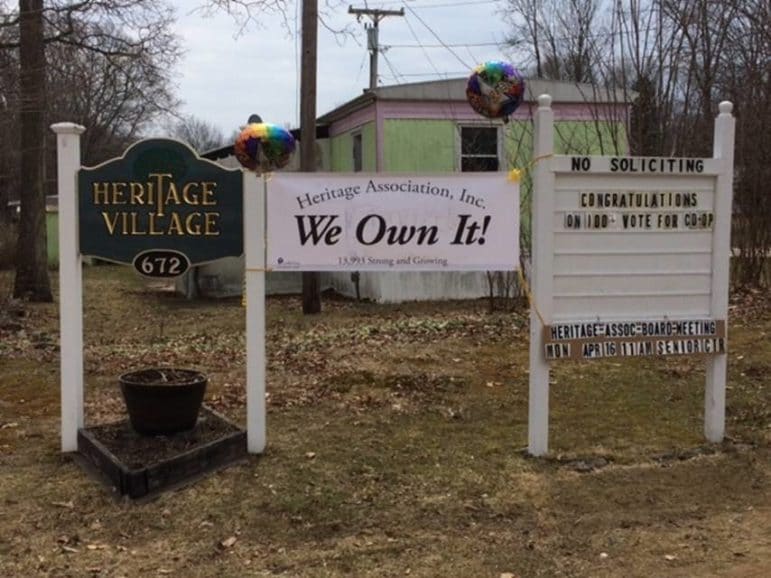 “Everyone stood up and clapped,” said Dennis Morel, secretary for the democratically elected Board of Directors. “Everyone was pleased.”

Residents of the 91-home community purchased their neighborhood Thursday. The move means that residents will be able to control their own destiny, according to many on the Board.

“Now everyone will have a say in what’s going on,” Board member Herb Kingston said. “That’s a big thing.”

Dave Adams, who served as the president through the transition, agreed.

“People are very, very happy that it’s changing,” he said.

There’s already been a rise in neighbors asking about volunteer opportunities in the community due to the excitement of owning the neighborhood, according to Gail Lavalle, treasurer for the Board.

“We’re proud of where we live,” she said.

Adams said he’s seen this excitement as well, with nearly twice as many people attending meetings than in the past.

“It’s going to flourish in here,” he said. “A little bit of good work goes a long way.”

For nearly two decades, Adams lived in a resident-owned-community in Florida before moving to Heritage two years ago to be closer to family.

“When people there saw something that needed to be fixed, they didn’t say, ‘You need to do this’,” he said. “They asked, ‘What can we do to help you?’ I can see that happening here, too.”

Residents bought the neighborhood for $840,000. Though unified under one name now, two groups make up the co-op: the Heritage Village Association, an all ages community, and Hillside Estates, a 55 and older community.

There are vacant sites in each section with utilities already laid and ready for homes to be placed.

Interest is already peaking in those lots. A new homeowner is expected to move in June, Lavallee said.

Board Members said they don’t have any plans to raise rents in the near future. One of the first projects they plan to tackle is fixing the pump for their water system.

The community’s marketing website, set to go live next week, will also be a boon for the neighborhood as way to show people interested in moving to Heritage what life is like there, Adams said.

Cooperative Development Institute will offer Board members coaching for the duration of their mortgage — at least 10 years. This was the 20th cooperative in Massachusetts and 39th in New England that CDI works with.

“Taking this step they finally control the land under their homes and the quality of services they receive,” said Andrew Danforth, director of CDI’s New England Resident Owned Communities (NEROC) Program. “We look forward to working with them for decades to come.”

A celebration will be held on April 20.