I spend much more time flying than driving to ROCs these days but the last two weeks has been a fun return to seeing a lot of NH’s ROC leaders.

I was really happy to speak to the Class of 2016 Community Leadership graduates on April 15 in Concord, N.H.

It was great to see some old friends and meet many new ROC leaders who participated in the seven-month leadership development program, now in its 10thyear!  This year’s class was the largest ever with 22 ROC leaders from 14 ROCs.  Congratulations, all! 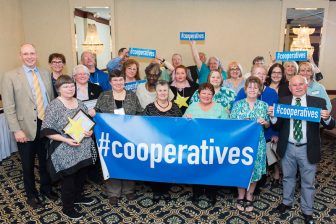 The camaraderie among the graduates was obvious; word of a summer retreat was a topic of discussion.  I loved Sharon “Cookie” Brant (Otarnic Pond Co-op) and Betty McKiever-Lowell’s (Forest Park Co-op) class address where taking the risk to be a little zany was gracefully mixed with some very sincere remarks about the value of gathering with fellow community leaders.

The following weekend I was invited to the Freedom Village Cooperative’s celebration of their purchase.  Wow!  To my surprise, also on the speakers’ list was their State Sen. Dan Feltes and Rep. Paul Henley as well as Concord Mayor Jim Bouley and Councilman Alan Herschlag.

Each one of them expressed appreciation for the co-op’s members stepping up to secure and improve their community.  Representative Henley offered some sage advice to the now democratic community, saying, “Be nice to the minority because sometimes you’ll be in the minority.” 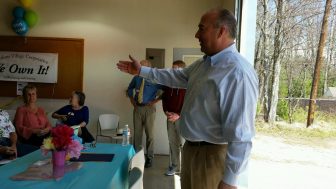 I was happy to follow them to say both that public officials are friends of local ownership and engaged communities.  Co-ops have historically had great relationships with their towns, cities and counties.  That’s really important.  Congratulations, Freedom Village!

And, last but not least, I was happy to speak at the Co-ops Celebrating Community Saturday where 130 ROC leaders from across New Hampshire came together for many workshops and a tradeshow of vendors who serve NH’s 119 ROCs!  Imagine that!  Property managers, insurance agents, home lenders, state environmental services, USDA, two home retailers (one for profit and one nonprofit) as well as myROCUSA.org and ROC Mall there to educate and offer services to ROCs and ROC members!

ROCs have come a long way!

I was happy to show the ROC Association video and encouraged these ROC leaders to increase the awareness of what they’re doing.  Good things are happening.  Let’s get the word out!

Like and share the video.  Let’s get the word out!  ROC on New Hampshire!  ROC on USA!