I spoke at a conference Friday on the West Coast that focused on making sure manufactured housing continues to play an important role in the affordable housing sector. 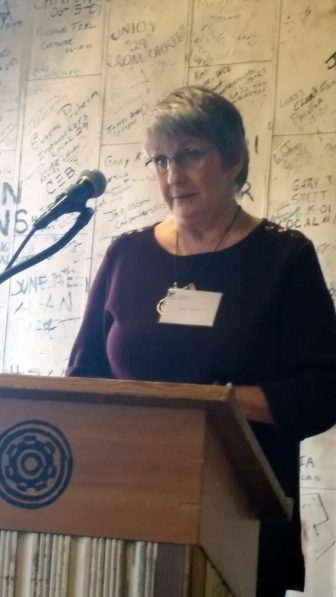 First, I am happy to report that the CASA team is doing some outstanding work building partnerships with a range of players – from industry, lenders, energy efficiency players, new home retailers, and the public sector – in Oregon where the affordable housing crisis is severe in part as a result of a lot of people moving to Oregon.  It is definitely a great place to live.

With that support, along with their own entrepreneurial drive and highly capable staff, CASA has helped nine ROCs acquire their communities since 2007.  Two of those ROCs were represented at the conference by two ROC leaders – “Sam” Priscilla Morris and Sara Stanley.

Before I introduce them further though, there’s someone else to introduce and a situation to explain.  Her story is one of many reasons why so many of us are dedicated to helping homeowners gain ownership of their communities. 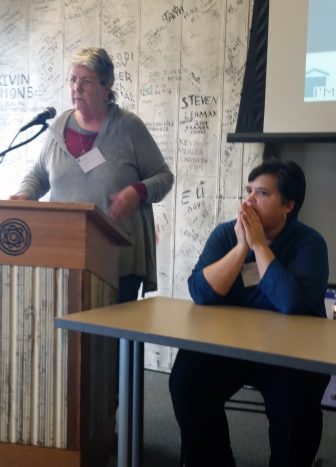 I have been hearing similar stories for 28 years; every one breaks my heart.

Diane Pense might be old enough to be my mother, if she had her kids young, or certainly be an older sister or cousin.  At any rate, she could easily be the “lady next door” to anyone of us.

Diane spoke on Friday, too.  She told the 90 folks her story, her problem.  She started and then stopped to get some water and gather herself.  The audience was silent.

She explained that she and her husband are retired.  They own a double-wide in Lostindas, a 10-home “mobile home park” southeast of downtown Portland. 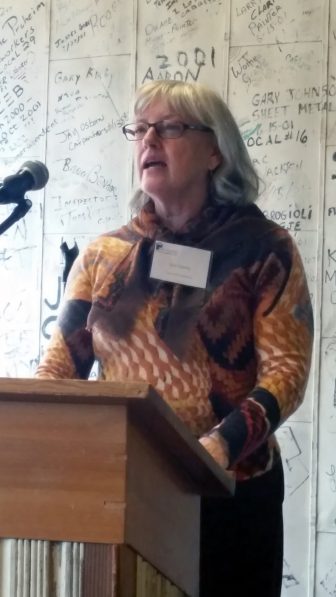 It is their retirement home, or was until a letter from the community owner – a relatively new owner – arrived explaining the community will close in 12 months.

She’s clearly shaken.  Who wouldn’t be?

Moving the home will cost $18,000, she said.  State law requires the community owner to pay $7,000 in relocation expense.  Both the relocation expense and the 12 months afforded them under state law is more protection than exists in most states.

Of course, she’s not feeling that it is sufficient protection, and you can’t blame her.  Her retirement plans are now completely in question, and at risk.

Apparently, finding a site in the area isn’t looking promising.  The one ROC in the region – Clackamas River Community Co-op – is fully occupied.

Community closure is one of the fundamental risks when you own a home on the land of another.  It’s the most dramatic of the risks, and it’s in the caards anytime the land has a “higher and better use.”  That is, more pointedly, a more profitable use than as a “mobile home park.”

My heart sinks with every closure story.  I know I have let down desperate people and communities facing closures by not having ROC USA in more places and not being better resourced to save more communities.

I have critics who hold me in part responsible.  That the criticism is a scar on me that will only fade when together – with affiliates like CASA and more like them and the many other supporters that it will take – we make resident ownership viable everywhere and a realistic choice before communities are slated for closure.  It will never be perfect.  Communities slated for closure are often dilapidated due to years of no investment and they carry a value that is over what can be secured through resident ownership.

But, we can do better.  Our mission is to provide homeowners with the choice to eliminate the risk of community closure and displacement.  Eventually, we need to make stories of closure – and the loss of a home and a plan for the lady next door – a thing of the past.

We also need to celebrate when homeowners choose community self-help to eliminate that risk.  Celebrating self-determination and cooperative ownership success stories is easy, especially when it’s told by community leaders themselves.  Two spoke after Diane on Friday.

Sam Morris is the treasurer of the Saunders Creek Homeowners Cooperative in Gold Beach, Ore.  Sam has been a leader in the ROC over their six years of resident ownership.  She said, “Thank goodness we bought our community.”  She spoke of improvements and the pride of ownership that now permeates the community.  She also noted that monthly site fees have been stable for six years running.  Living on a fixed income, that part of her story is really important to her.

I met Sam in 2011 at the Community Leadership Institute in Kansas City.  Seeing her again and hearing of their success alone was worth the trip!  Sam is smart, dedicated and tells it like it is.

Sara Stanley, a director from the Vida Lea Cooperative, was a new leader to me.  I loved her story!

She bought a home in the ROC after its purchase by the homeowners.  She drove by the co-op’s sign on her way to her daughter’s home and was intrigued.  She had not heard of “mobile home park” co-ops but she was familiar with co-ops and had looked at starting one before.

She wanted to be near family and she wanted to live in a community.  She – like I – thinks that as a society we’ve let community slip too much.  We’ve become too isolated, too distant from our neighborhood.  We need to put effort into building community but it is community most of us want.

She bought a new energy-efficient park model home (just 396 square feet) that she likes in a community she likes.  It’s close to her daughter, and she seems very happy.  She’s also very inspiring for her spirit of community and for her desire to let more people know about co-ops.

Thank you Sam and Sara for representing resident ownership so well, and for your leadership in your communities and beyond.  And, to Diane and her husband and neighbors, our collective hearts go out to you.  Best wishes.