The reporter did a good job covering the basic issues from a homeowner’s perspective – raising rents and house value depreciation – but he didn’t capture much of the industry’s views on either. 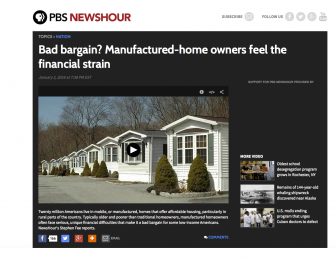 His coverage of manufactured housing loans focused on regulations in the Dodd-Frank legislation and he got both industry and consumer advocates talking.  But, he left open a very big question:  If both industry and consumer advocates want to make sure decent, small dollar manufactured home loans are available to home buyers and also want to preserve the consumer protections in Dodd-Frank – something both spokespeople stated – why aren’t the two “sides” working together?

They should because that’s how policy is advanced.  Grandstanding is pretend governance; finding win/win solutions is effective governance.  For the sake of homeowners, homebuyers and community owners, I hope people start to recognize that working together is the only way forward.

I want to focus on the MHC issues.

In the same period of time, both homeowners believe their homes lost at least half of their value.

What does this mean to both “sides?”

On rents, it’s a fact of life, costs and rents go up.  In these two MHCs, underlying operating, personnel, financing or improvements costs may have gone up.  So, too, may have profits.

The bottom line: A commercial owner is generally going to raise rents over time. That’s their right.  They own the land and operate a business.

In MHCs, the process raising rents has two impacts for the commercial owner:  One, monthly cash flow improves and two, the value of the MHC increases.  With respect to the latter, that means when the community is sold, the new buyer will need to increase rents further to pay the financing costs on the now higher price.

When you think about that purchase and sale cycle over and over, it leads people like the 31-year owner of a home in a New York MHC say, “I figure I’ve paid for my lot 3 or 4 times.”  She probably has.

The two homeowners interviewed, and many others like them, are right, rent increases are hard on low- and moderate-income households.  Rent increases put them at risk of losing their homes or giving up other wants and at times, needs.

Knowing good people on both sides of this debate, I see a stalemate where both sides can be right.

It’s really a matter of how the marketplace – the sector – is currently structured. There is a basic and unavoidable misalignment of interests between community owner and homeowner in commercial MHCs.  Sometimes that misalignment is masked by a community owner who doesn’t maximize the potential of his investment.

And, sometimes it is naiveté and optimism that leads buyers into manufactured homes.  Sometimes their expectations are met and other times, they’re not.  It is that very real pain and disappointment that leads them to the press, the legislature or city council.

In resident-owned communities (“ROCs”), rent increases don’t carry a profit margin or serve to increase the value of the MHC as a part of a plan to sell it. Instead, resident ownership removes the property from the commercial investment market, and aligns ownership interests.

Until we have a sector structured around alignment of interests, we will endure tension and arguments played out in the press between opposing parties.

The conclusion of a Consumer Union study is that homes in MHCs do depreciate over time.

As Dick Ernst, the industry spokesperson in the PBS story, said, “You do remove that appreciating portion of the transaction if you have no real estate with it.”  But, we’re not talking appreciation, we’re talking depreciation.  Why should a manufactured home lose value in an MHC?

Again, we have two parties with different and opposing views.  To the commercial owner, I’ve heard it said, the appreciation is in the land, not the home.  So, here again, the idea that homes don’t appreciate is baked into the market, in this case though, I’ll say “market mentality.”  It could be different.

While it’s true that buildings depreciate and land appreciates, there is “contributory value of land” to the value of buildings which certainly can and do appreciate.  That occurs with homes in MHCs, too.  There are some manufactured homes and MHCs that are so highly desired that homes appreciate.

What leads those homes to appreciate is contributed by the land.  Or, better said, by a land owner who doesn’t claim all of that “land appreciation” to him or herself.

How does a commercial owner collect the land appreciation while still owning the MHC? Through lot rent increases.  Those same lot rent increases that in turn create more value by increasing the value of the MHC!

However, to the homeowner, rent increases are monthly cost increases and, unbeknownst to most, a hit on their home’s value or price because rent increases reduce house prices – essentially taking that land appreciation out of the value of the home.

This issue is hard to resolve.  However, one proven way is for homeowners to buy the MHC and run it well.

After over 20 years of helping form ROCs in New Hampshire, we hired a team of researchers from the University of New Hampshire to test the economic outputs of resident ownership.  What they found was that lot rents in ROCs were below market after three years of ownership and that homes were selling for more and faster than those in comparable commercial MHCs.  (2006, Carsey Institute, UNH)

It’s not automatic.  It takes opportunity – community owners have to be willing to sell to the homeowners – and it takes good management by the ROC but it is possible to align ownership interests in MHC.  And, at least settle one argument in which both parties are right and still stuck in a stalemate.