Home / Blog / President’s Blog / The thrill of victory, and agony of defeat

SALT LAKE CITY, Utah — The absolute worst phone calls I get are from homeowners facing eviction due to community closures. The calls are, unfortunately, regular. Today, for instance, there’s an email from a Legal Aid lawyer who is representing homeowners in a MHC that is without water. The community owner has walked away, and homeowners are facing mass eviction by the municipality.

And, a recent high-profile case – Lowry Grove MHC in St. Anthony, Minn., – was literally cleared out two weeks ago after a nearly two-year battle. That closure is heartbreaking and devastating, including the suicide of one longtime resident and the displacement of the more than 90 families who once lived there. Many of those families lost their homes altogether despite there being a homeowner-funded relocation trust fund in the state.

Resident ownership wasn’t a solution there due to what we too often see in closure situations: the infrastructure is shot, there are vacancies and the value of the community is based on the alternative use. Without significant public subsidy – of the sort and at a level infrequently available – there’s just no chance for the homeowners to gain control and ownership.

So, when Shirlene Stoven, President of Applewood Estates Homeowners Association in Midvale, Utah, called me in March, that all-too-familiar shiver went through me as she told me their situation. The community was being sold and, she suspected, it was for redevelopment. We soon confirmed her worst fear, the sales flyer bluntly stated the appeal of “strong interim cash flow with huge upside upon redevelopment.”

The message to developers was clear: Buy it, collect reliable rents for however long, redevelop it and make really big money.

UROC, ROC USA Network’s local affiliate and ROC USA worked with the HOA and put forth a bid. We also tried to talk with the seller but repeated calls were not returned. No surprise, really. The HOA had opposed the owner’s attempt to redevelop the property.

By May, the 56-site community (with a site-built house and duplex) was under contract with two local developers for $4.6 million, a full $600,000 over the asking price. The broker called it “a feeding frenzy.”

We got the news of their contract on a Friday and I spent the weekend kicking myself, going over and over what we could have done differently. I was sick over this.

We regrouped early the next week and decided we needed to learn the contracted buyer’s name and get in touch with them. We secured it and Shirlene contacted them and asked them to meet with the HOA Board. They did within a few days. They’re two local developers who didn’t realize the homeowners wanted to buy it. They said they would make no commitment to keep it a MHC but that they would sell to the homeowners if we could complete a purchase not too long after they closed. We signed a Letter of Intent in May and began working on financing immediately.

The central component of the financing was a low-interest loan from the Olene Walker Housing Loan Fund, a state program named after a former governor. The HOA needs a $1 million second mortgage from Olene Walker, a $3.6 million first mortgage from ROC USA Capital and $400,000 in grants to buy it.

I’ve called it “an uphill battle.” Shirlene says, “We don’t know any other type!”

And, a week before we’d make our presentation to the Olene Walker Board of Directors, the hill got steeper. We learned that the staff was recommending against funding the HOA due to concerns about the price and about affordability compliance.

I said, “Well, clearly, a positive recommendation would be better.” Shirlene said, “I have a feeling we’re going to be OK.”

We made our presentation Thursday.

Shirlene spoke first. She gave a stirring introduction, reviewing their four-year battle to save their community and citing the 2,600 petition signatures and individual donations of nearly $30,000, half of which they’ve already collected! She included verification of an official vote of the Midvale City Council in support of their purchase and lovely pictures of the community. It is a very nice community. She was honest, genuine and rightfully a bit emotional.

I was to deal with “the business issues” feeling every bit as emotional as Shirlene after her remarks. I also knew I needed to compose myself; a yes or no vote was in the near future and staff had expressed serious concerns. I had to answer the technical issues.

We talked about the value of the property – it is a value based on an alternative use – but looking at it as compared to the assessed value is not the way to appraise a property. The fact is that it just sold for $4.6 million. That is by definition the market value of that parcel.

The compliance issues – how can the co-op ensure that homes will be occupied by very low-income homeowners throughout the compliance period and how will we report on that – are much more challenging. However, they’ve been solved elsewhere and ROC USA as an exempt organization has IRS instilled requirements, too. Further, the Fund’s two experiences with financing MHC co-ops are not reflective of our work with ROCs. We don’t turn our backs on communities after closing. UROC will be there with ongoing training and coaching and Network will provide national services. I also gave examples and expressed our openness to working with staff to find the right solution for the agency and Applewood.

We then opened for questions, and there were plenty. Every Director in the room had at least one for us. I think it took about an hour but honestly, I wasn’t paying attention to time. I almost missed my 2 p.m. flight. (Thankfully Shirlene and Lisa, another HOA Director were excellent pilot and co-pilot in getting me to the airport just in time!)

I pinched Shirlene after a favorable motion was made, and cringed when it was withdrawn.

We had more discussion. Staff was consulted. The Directors talked. We chewed our nails.

A second motion was made – this time for funding approval on slightly different terms but contingent upon staff working out the compliance issues and presenting those with a recommendation in a to-be-scheduled phone meeting of the Board. The vote was 4 for, 1 opposed.

We did it! Applewood Estates HOA won, well, will soon win! We have a favorable vote and we will work this out, I’m wholly confident of that. We are not going to get this close and fail!

Without question, we benefited from a very informed and experienced group of Directors and a cooperative staff who saw that we could figure out the compliance issues if we spent some time together. Everyone is super motivated. They clearly understood the emotional issues. What impressed me is their quick grasp of the technical issues.

I wish, surely wish, we could do this with more resident groups facing imminent displacement. If there were more Olene Walker type funds in all states, we surely would. Thank you Olene Walker Board and staff. Congratulations Applewood Estates homeowners!

Applewood Estates HOA, UROC and local supporters are showing everyone that closure and displacement can be avoided through cooperation. I’ve traveled the full emotional spectrum with this group in four short months … and today I’m on the thrilled end of the spectrum!

Today, in Salt Lake County, we know the thrill of victory – and this time, the agony of defeat is nearly out of consideration. 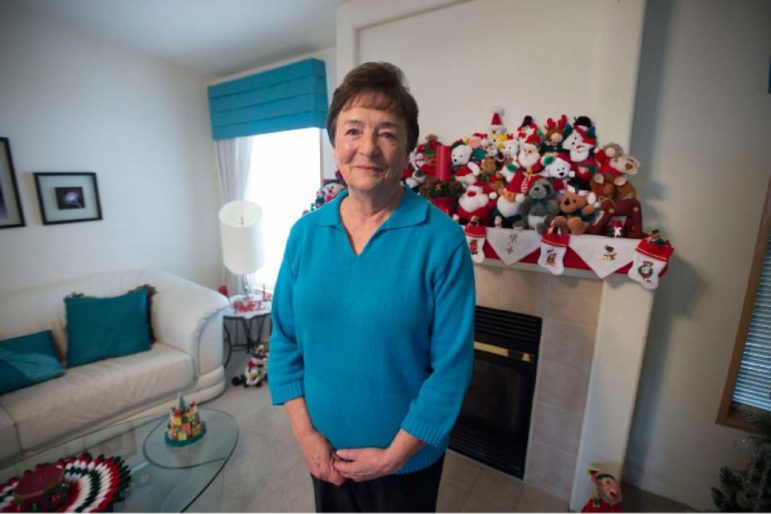