Home / Blog / ROC Association's Blog / Victory to the Seattle Seahawks and to the Great Northwest!!!! 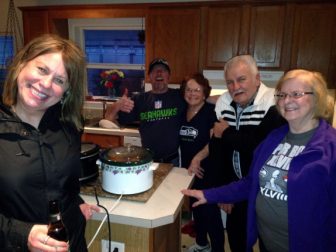 Living in the home of the Seattle Seahawks as a 12th Man since I arrived in 1995,I am excited to say this football season has been a blast. Yet NOTHING takes the victory win over living in a Resident-Owned Community.

Let’s just say for the past 13 months I have been on an astronomical high.With ROC USA’s dedication along with Northwest Cooperative Development Center (our TA Provider), Duvall Riverside Village Co-op came into being in December 2012. With 25 homes on 4.5 acres, a true community has evolved. Was it work? Is it still work? YOU BETCHA. But the fruit of our labor is in the photos I am sharing with you all. (Click that link to see them all, but here’s one as a sneak peak!)

Having a home to host an awesome Super Bowl party was the icing on the cake. Most of the people in the photos you see are my neighbors, along with family members. My husband makes his famous seafood chowder every Super Bowl. Non-football fans will come just for the chowder.

This year we have much to celebrate — and it’s not just what happened on the field!