In my presentation on the Sunday afternoon in Orlando, I explained what motivates me and why we do what we do – our “reason for being.”

I am going to take a few blog entries to revisit that presentation, which is also now on the CLI page of myROCUSA.org for you, too. Feel free to share it with your Board and Members if you’d like!

You might recall that I started with a slide quoting myself (on a humorous note and) because the subject requires a mind-jarring, blunt opening. So, I quote (ahem):

“Travel trailers grew into permanent homes without any fundamental change in the underlying campground business model.”

Some of what started out as small, pull-behind campers in the 1930s and ‘40s started to grow longer by the late ‘50s. As they grew, they became much less mobile. Popular Mechanics [July, 1960 attached below – check it out] described the evolution this way:

“All this started years ago when people with small vacation trailers first stretched an awning out to one side … ,” the article reports. “Technically they are still trailers, the law says they must have wheels and tires, a towing hitch and an annual license plate, but from a practical standpoint it’s a real chore to uproot a 60-foot trailer and put it on the road.”

Now, the other part of the story is what happened with respect to where these “mobile home residences” were sited – that is, the land on which they were placed. For that, outside of the California resort parks referenced in the article, developers let campgrounds evolve into the trailer parks or simply developed trailer parks as a part of the building boom of the 1960s and ‘70s, the period in which most parks were developed.

Popular Mechanics reported there were 14,000 parks in 1960 and projected 1,000 new parks would be developed every year. We know today there are roughly 50,000 parks so they were not too far off. Beginning in the 1980s, zoning laws began to dramatically slow the rate of new park development to what is now only a dribble of new communities popping up every year.

In the boom years, developers chose the campground business model – renting sites on a month-to-month basis – because the business model was so attractive. Selling people a home and renting the land is very profitable. Google “mobile home park investing” and read the many reasons it’s so good for investors: Homeowners who can’t afford to relocate have a high tolerance for rent increases, investors don’t have to bother with leaky faucets because they’re only renting the land — the list goes on.

So, I’m not surprised that Popular Mechanics’ early view of “a trend now toward trailer-park subdivisions in which you buy your plot of ground instead of renting it” never caught on. Selling the land meant no rental income from people otherwise highly motivated to pay rent over the long-term. To investors, that has loud and clear “cha-ching” sound to it.

So, what you and I are involved in now is correcting an accident of history. Really, should public planners have permitted developers to sell homes on land they rent for a profit while offering no real protection from rent increases or community closures?

In my view, homeownership should never have been combined with renting land as “mobile residences” became “permanent and luxurious” homes. Secure homeownership cannot be attained while exposed to the risk of community closure due to change of land use, excessive rent increases for no increase in services or increase in underlying real costs, or poor maintenance by absentee landlords. No, homeownership should mean security, and the more the better.

And, nothing is more secure than ownership. At ROC USA, we stand for local ownership. That’s why we do what we do. We work hard to make resident-ownership safe and secure because that’s what homeowners want and need. That’s our reason for being. 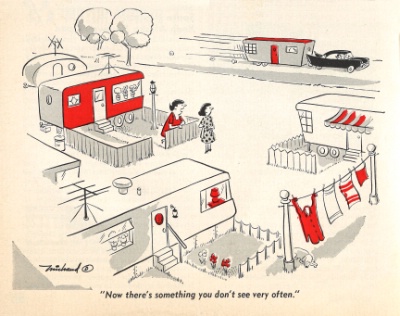