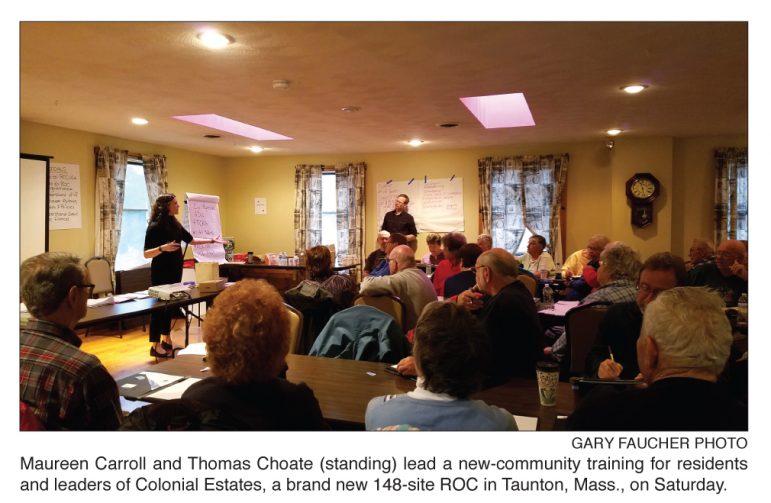 Colonial Estates, the newest addition to the ROC USA family of resident-owned communities, held a new-community training over the weekend with what is probably record turnout for such an event.

Gary Faucher, ROC USA Network’s new National Training Manager, spoke at the event, and said he was taken aback by what he described as unprecedented enthusiasm. Faucher, who came to ROC USA in August 2016 after 30+ years as a trainer and 6 years at ROC-NH (ROC USA’s affiliate in New Hampshire and the organization from which it spun off in 2008), said he’s taken part in dozens of ROC 101 trainings and always considered 12-15 participants to be commendable participation.

“Colonial Estates filled the room, they had 40 people there,” he said. “The coolest thing was they went around the room so everyone could introduce themselves and describe the best part of purchasing the park for themselves.

Colonial Estates is a 148-site community in Taunton, Mass., whose residents purchased the land beneath their neighborhood on Aug. 31 for $10.2 million. The purchase came just three months after the residents of Oak Hill, another manufactured home community literally across the street, made the very same decision to buy.

The residents of both communities made the purchase with the help of Cooperative Development Institute, ROC USA’s affiliate in Connecticut, Maine, Massachusetts, Rhode Island and Vermont. CDI staffers Maureen Carroll and Thomas Choate led the ROC 101 training Saturday.

“I heard story after story about all the activities going on thanks to Oak Hill’s very active social committee,” Faucher said. “It sounds like there’s always stuff to do and the people are very friendly. There is just a wonderful energy in this community from the very beginning and it’s just the coolest thing.”

If your ROC hasn’t had a ROC 101 training (sometimes called “Boot Camp”) or you think a refresher might be in order, contact your ROC USA Certified Technical Assistance Provider.