BURLINGTON, Vt. — Thanksgiving has always been a time to celebrate sharing the bounty of the harvest, and that was no different in two Vermont resident-owned communities.

At North Avenue Co-op in Burlington, the weekend before the holiday was quite busy for Board President Steve Hamlin.

For the second-straight year, North Avenue Co-op partnered with Feeding Chittenden to provide turkeys to those who need them in the community.

Hamlin and the Board put out requests on their community Facebook page and sent out an email to solicit turkey requests. He says working with Feeding Chittenden is so easy – “I give them a number, and every time they say, ‘no problem.’”

This year, Hamlin and his wife loaded 72 turkeys into their pickup truck and delivered them to the doorsteps of Member households in North Ave Co-op.

“I didn’t get a chance to talk to many people this year because of distancing, but last year we received lots of positive response,” Hamlin said. “We heard a lot of people say, ‘If we didn’t have this turkey, we wouldn’t have had a turkey for Thanksgiving at all.’”

Meanwhile, one town over in Colchester, Westbury Homeowners Association Board President Gayle Pezzo and a team of volunteers cooked and individually packaged Thanksgiving dinners for 20 elderly, single, and disabled members of her community.

Early in the pandemic, Pezzo connected with Tuberville, a collective of nearby farms, to arrange weekly deliveries of fruits, vegetables, breads, meats and sweets to the cooperative’s office building. Community members are welcome to help themselves to any items that are available. News of the program was shared to the 250 homes through messages on Facebook and through calls to residents.

The Thanksgiving meal at Westbury wasn’t a one-off—from Easter through August, Pezzo and two other members of Westbury’s Volunteers Committee were making 35 meals per week using extra food from the Tuberville deliveries. Furthering the cooperative spirit, three of the turkeys used for Thanksgiving were donated from North Avenue Co-op, strengthening a summer’s worth of exchange between the ROCs.

“We realized early on that we were getting so many provisions even after freezing extras for the community meals, so I reached out to the board presidents at the nearby ROCs to tell them to come grab provisions for their communities, too,” said Pezzo, who added, “This was a good opportunity to network with the other co-ops in our area.”

Westbury’s Volunteers Committee is planning another meal delivery for Christmas. She noted that the program has brought out the best in their community and is 100 percent volunteer funded – people receiving meals often return their reusable containers with a $10 bill attached, and people have been anonymously delivering canned goods to Pezzo’s porch. They received enough canned goods that they were able to turn the kitchen area of their office building into a community pantry.

“We said from the beginning ‘We’ll be doing this until we’re COVID-19 free,’” said Pezzo. “We had no idea we’d be doing meals for this long, but it’s really important for us to band together and be a community.”

“It really inspires me to see NAC and Westbury going the extra mile for their communities, especially during these challenging times,” said Jeremiah Ward, Cooperative Housing Specialist at CDI, who added, “The best part of my job is when I learn that the ROCs I work with are connecting with each other and supporting each other in such a tangible and meaningful way. Kudos to Steve and Gayle and to all the volunteers that are putting in the effort to make this holiday season special for their neighbors.” 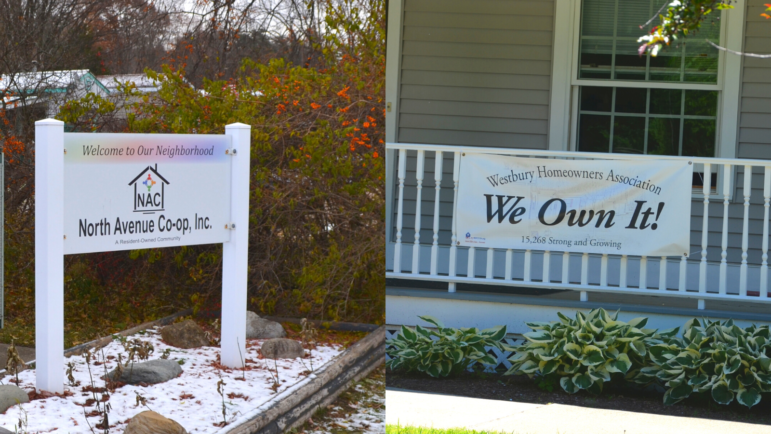